I keep reading all the blogs and everyone has 2011 recaps. I thought about going through each month and posting my favorites, highlights, all the memories. And as I started to, I started to just cry. 2011 was such an emotional year for me.

So much happened. So much changed.

Marshall and I drove a Uhaul to Philadelphia which made it real that I was actually moving. My first niece was born all the way in Virginia, we found out who our adopted Korean nephew is but still no date of when they will get to have him, WE GOT MARRIED (pretty big one,  it probably deserves a featuring picture) and I immediately moved to Philadelphia, start the water works flowing. Cathy came to visit in July and we watched every season of 'Make It Or Break It'.  We had fun weekend trips with The Bryants, here and here. My parents came to visit a city they forgot they had already visited. Marshall and I road tripped to Canada. Marshall's parents came to visit and we took them to Amish country. We spent Thanksgiving in Richmond  with my brother and his family. We had a China wedding reunion in Baltimore and I forgot how much I missed these people. The Cowboys won The Big 12 Championship and Marshall and I played for high stakes. And Christmas happened in Oklahoma.

But the biggest, most unexpected, unfair event of 2011. Was when my sweet Grammie was diagnosed with Pancreatic cancer in July. The unthinkable. No one expected, no one had any idea. It hit our family hard. But she hung on to celebrate her  61st wedding anniversary in early August. But then lost the battle and was taken from us in late August.  Our sweet and gracious Heavenly Father wanted her with Him. Who can blame Him. She was the best. And my heart still hurts. 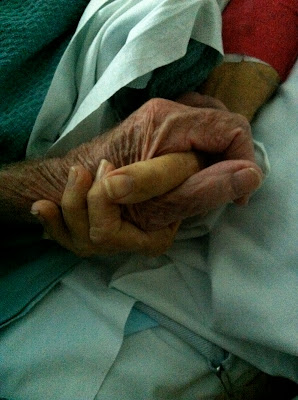 And I still miss her every single day.

Just catching up on your post and this one makes me wish I waited until we were roomies to read this so we could cry and hug together! Missing that beautiful crazy, wonderful woman! Missing you and looking forward to the time I will soon spend with you and Marshall. Can't wait!