If you follow me on twitter then you might have read about the little game Marshall and I were playing. We had bets in place, but they somehow all ended up with Marshall cooking for the next 2 weeks, win or lose. But seeing as he has finals for the next 2 weeks, I couldn't do that. So we settled on something else.
Strip Touchdown Football.

Now, this only worked because #1 We are married. #2 We were alone. #3 We are newlyweds :)
But it might just be our regular house divided bedlam tradition.

It worked like this.
Everytime the Sooners scored (extra point not included) I had to lose an article of clothing. Everytime the Cowboys scored, Marshall lost one.
I'm pretty sure Marshall knew that the Cowboys would dominate the scoreboard because he was layered. Our house is cold. 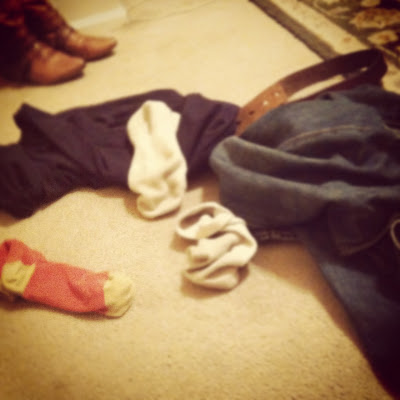 I lost my orange socks.
That is all.

So proud of my cowboys. So proud to be able to call Oklahoma State University my alma mater.

And now, we wait in anticipation to see if if those idiot voters pick Alabama to play LSU for the National Championship or if OK State is going to have its try. But if you pick wrong, Boone Pickens is coming after you BCS jokesters.
“If we don’t get in the BCS (championship game), I’m not kidding you, if I have the power to do it, I’m going to have an investigation,” - T. Boone Pickens
-Tulsa World

from the stripping, to the OSU pride, to the threats by T.Boone.

We will find out tonight!!!
I'm really rooting for ya'll... You deserve it, be far.