I saw these 2 Oklahoma things on Facebook today and thought I should share them. After all, I am in Oklahoma.

To my 2 followers not in Oklahoma, it really probably won't be as entertaining. But for my fellow Oklahomans, aren't they both so true? I laughed out loud at the list one. 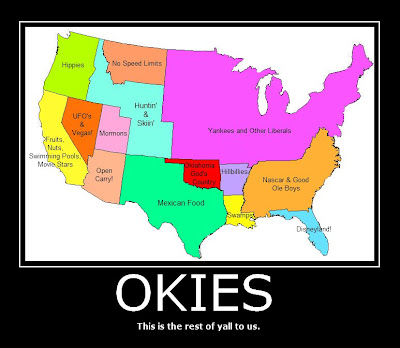 You know you're from Oklahoma if:
1. You can properly pronounce Eufaula, Gotebo, Okemah, and Chickasha.
2. You think that people who complain about the wind in their states are sissies.
3. A tornado warning siren is your signal to go out in the yard and look for a funnel.
4. Your idea of a traffic jam is ten cars waiting to pass a tractor on the highway.
5. You've ever had to switch from "......heat" to "A/C" in the same day.
6. You know that the true value of a parking space is not determined by the distance to the door, but by the availability of shade.
7. Stores don't have bags, they have sacks.
8. You see people wear bib overalls at funerals.
9. You think everyone from a bigger city has an accent.
10. You measure distance in minutes.
11. You refer to the capital of Oklahoma as "The City."
12. It doesn't bother you to use an airport named for a man who died in an airplane crash
13. Little smokies are something you serve only for special occasions.
14. You go to the lake because you think it is like going to the ocean.
15. You listen to the weather forecast before picking out an outfit.
16. You know cow pies are not made of beef.
17. Someone you know has used a football schedule to plan their wedding date.
18. You have known someone who has had one belt buckle bigger than your fist.
19. A bad traffic jam involves two cars staring each other down at a four-way stop, each determined to be the most polite and let the other go first.
20. You know in which state Miam-uh is and in which state Miam-ee is.
21. You aren't surprised to find movie rental, ammunition, and bait all in the same store.
22. Your "place at the lake" has wheels under it.
23. A Mercedes Benz is not a status symbol. A Dodge Ram 3500 4x4 or Ford F350 4x4 is.
24. You know everything goes better with Ranch.
25. You learned how to shoot a gun before you learned how to multiply.
26. You actually get these jokes and are "fixin" to send them to your friends. Finally, you are 100% Oklahoman if you have ever heard this conversation: "You wanna coke?" "Yeah." "What kind?" "Dr. Pepper."

Uh. I am obsessed with Oklahoma.

I am having so many memories coming back from this post! I remember calling Time and Temp every morning before class to know how to dress. I remember driving in "The City" and y'all freaking out when I crossed 4 lanes of traffic like it was no big deal.

Although, when I went to Oklahoma, it threw me when y'all said "pop" and not "coke."

So many memories of OK! Miss it and miss you!

So, Oklahoma is the coolest state then, right? It's been established as fact.

For some reason all of these remind me of Cathy....